QUESTIONS FOR ARTISTS: "I think all artists are cowboys" 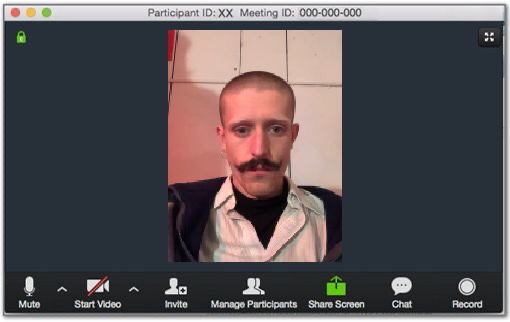 He sits in Zoom's frame within his perfectly lit warehouse room, his sculpted handlebar moustache and large pointed collar shirt which pokes out of a sweatshirt neatly characterises this joking and yet profoundly interesting and interested artist.

Ben Dawson is a queer working-class artist. Being brought up in Swansea and completed a foundation course at UWTSD, he moved toLondon in 2017 to complete his three-year BA in Fine Art at Kingston.

"I think all artists are cowboys, we are outlaws, villains, martyrs."

After an open call in July (which was shared through @sadgrads), Ben emailed us with a Youtube link for his film ‘If I show you more, am I less?'

He said he wanted to “roam the wild west in the literal sense” and find freedom “that has wind following through my hair, but I’m sitting on my laptop rendering these cowboys.”

“I went on a mad research rodeo into the identity and ideology of cowboys. I wanted to find ways to deconstruct this identity and its relationship to culture. We all have a connection to cowboys and that’s so vital for me.”

“I’ve gone from yeehaw cowboys to glossy, genderless figures that could be on mars (but not Mars because it’s crazier)”

Since the national lockdown 1.0, Ben’s work has taken a thematic turn. After a year spent fleshing out this CGI cowboy playground and finally sharing it beyond the Uni sphere, he decided he no longer liked what he had produced (a momentI’m sure a lot of creatives can relate to). He wanted to try something different. Covid and the exhaustion of ending his undergrad, forced him into a much-needed break from creating all together, he said he needed time “to become a human again.” He returned to his first love: writing. Which is where this current shift in his visual work stemmed from:

“I started to write some words about a personal experience I had, and I thought: how do I think about that in a digital sense? I played about with it and I found that I was getting so much closer to what I wanted to produce.”

Moving away from recycling image-based textures-that provided a basis for 'If I show you more am I less?’ - towards building digital textures from scratch, he has been able to not only challenge his technical ability but also his capacity to create something he swore to himself he would steer clear of. Images of shiny, glossy, mirrored textures (almost like visual ASMR) he thought were shallow, a spectacle for Instagram, part of a vanity project, “but now, I can’t stop using mirrors, I can’t stop creating things that look fake. I think I wanted to prove to myself that I could do something everyone else was doing but create my own narrative through it.”

Language is an integral part of his layered practice as it bridges the gap between materiality and immateriality. This allows him to explore the theme of alchemy- each have a huge part to play in his “aesthetic language.” He is constantly trying to layer together the visual and the verbal in order to begin world building. He says writing and using language acts as a “process of meditation”,it helps him to make sense of what is going on around him.

But there are inevitable limits to words.

Language has been the basis for his obsession and fascination with AI and coding. He explains to me that when an AI is in training, they call it “digital dreaming or hallucinating.” This name only exists, he says, “because the companies had to find a way to humanise these machines.” The language of the occult, a very human system of thought that explores the supernatural, is infused into tech like AI – this, Ben says, creates an uncanny attachment to it.

From the research process of his work, to compiling his “rolodex of references”, to building “narrative and texture maps", to releasing the product: Ben is constantly growing his arsenal.

“I think for me, now more than ever, I want to be able to address my own agency and positionality, I'm constantly working on my own.”

Ben is a working class, queer male artist. He said to me he finds that using this identity marker when applying for jobs, open calls etc. is vitally important for him, personally and professionally.

“I was really heavily affected by my sexuality growing up, it was still affecting me going into my foundation year and at uni, it caused a lot of stress.”

He went on to say that all of this is a part of his experience and creativity: he has an obligation to himself to make this clear. Having said this, he is very conscious of his outward presentation of white maleness, regardless of his internal experience, and how this is an advantage:

“It is weird for me to express myself, my male identity, as a minority especially when there are white men at the top in the creative industries, but I think the layers to my identity are really important to distinguish before people view my work. The word helps to normalise and legitimise identity.”

I told him that there is a constant internal debate in my own head about whether or not the context of the artist should matter in a gallery setting. I have always been intrigued by the notion of the ‘death of the author’ as a means to facilitate an equitable system of art. But Ben highlighted for me that when it comes down to the success of the artist (of which is, of course, entirely subjective but something all early-career artists have aspirations of), the barriers an individual may or may not overcome because of their identity are crucial to an understanding of the artwork and placing it in a time and space. The success of an artist is not only externally determined; it doesn’t have to be how the world sees you through these identity categories(such as your sex, race and sexuality). The success of an artist is so deeply determined by the internal battle and this facilitates or restricts the production of work.

(I could have talked for hours with Ben. His insights into his own practice by means of trying to make sense of WTF is going on around him opened up so many thoughts and feelings for me)

Ben's thoughtful and interconnected practice that visually plays with popular symbols like the cowboy, give so much room for the viewer to get what they want from his work. In a time of uncertainty and chaos, Ben's work offers a way out through an alternate world, at once material and immaterial.