In the fourth instalment of the series 'In my humble opinion', She Goat's online listening event is reviewed by Tanika Maya Lay 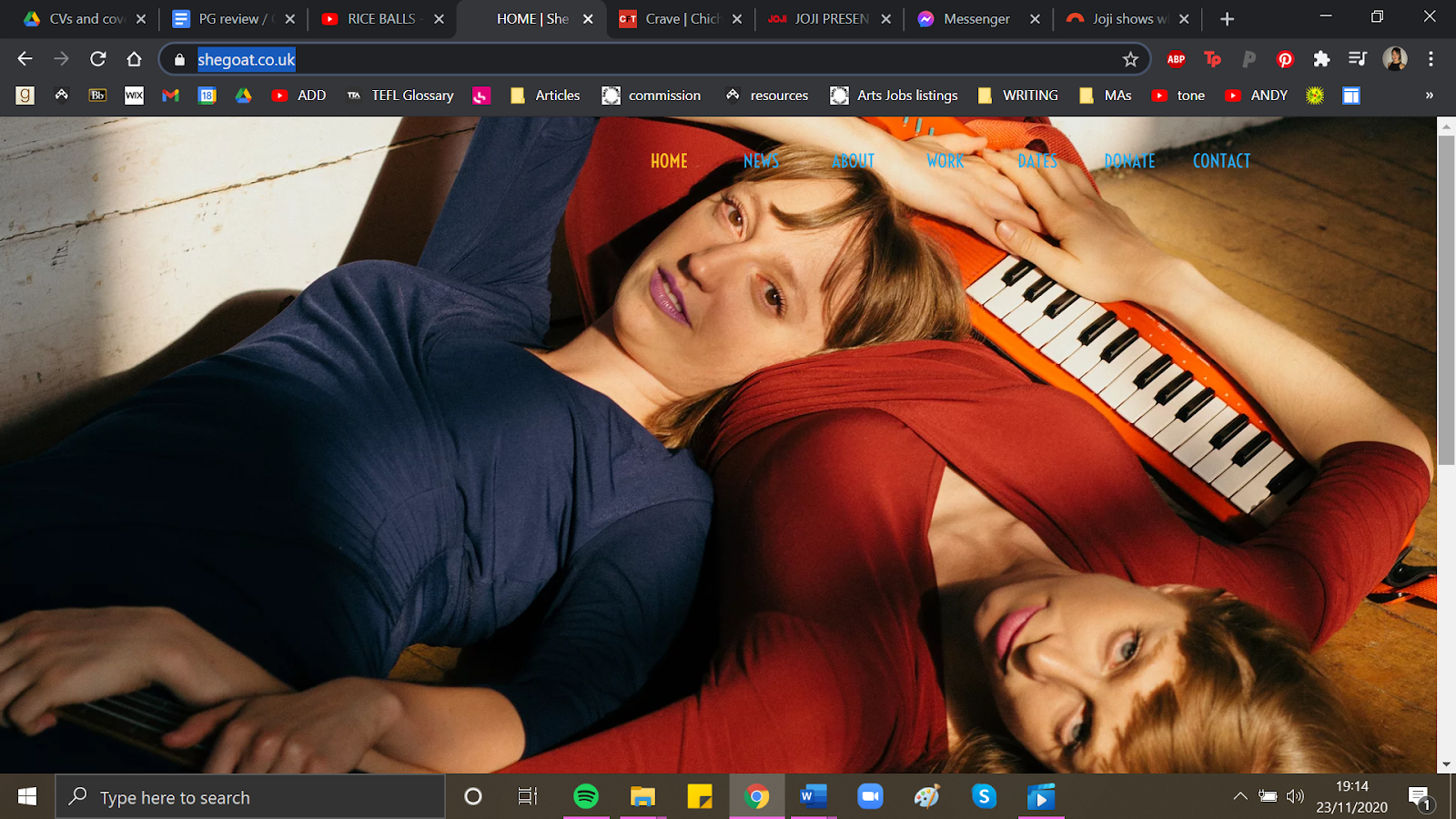 She Goat, comprised of Shamira Turner and Eugenie Pastor, have been queering and experimenting with live theatre since their beginnings in 2015. Their first production, DoppelDänger (2015-2018), is a frantically hilarious romp through time as two women, who look almost exactly alike, find each other and fall in love. In 2019 She Goat began a tour of The Undefinable, a gig theatre production, where the two performers play radio hosts, who, ignorant to the live, in-house audience, speak only through their desk-mics to the ‘radio-audience’. They speak to imaginary ‘phone-in listeners’, play requested songs - and then, when their mics are muted, we are introduced to their rich and intimate relationship, through brief conversations while the songs are playing. We guess it is a dramatised version of the truth. The production is as much about feeling the music as it is about the undefinable qualities of love, a concept they explore throughout, pertaining to loving people in ways that you cannot, and do not need to, define.

The Undefinable’s tour was disrupted early in its run by the pandemic, but the duo recently released a podcast miniseries of the same name.

Their most recent project came in the form of the Curious Hearts Song Club; an online listening party held in three weekly sessions. Once again, the heart of Curious Hearts was Pastor and Turner’s love for one another, for the projects they make together, for the spaces they create to connect with people, and for music. This was not a ‘theatre performance’ by some definitions  - it was unlike live-streamed productions such as Crave - but it was theatrical, as every participant interchangeably assumed the roles of both audience and actor on a small digital stage.

Each night is different, because the content is devised through the audience’s participation. Each ‘club’ has around 14 participants (including Pastor, Turner, and their technician Daniel). We’re hosted on a Zoom conference call - webcams: on, mics: on (occasionally), names and pronouns: visible. We take turns to introduce ourselves, and then She Goat explain that this ‘listening party’ is a space for us to sit together,  listen to and enjoy each other’s music, and listen, once again, to the stories behind them. So it works like this: She Goat  introduces the song, telling us briefly who chose it and why (information gathered from forms we’d filled out and emailed in the day before). They play the song and we listen to it however we like. It’s a little awkward at first, but Pastor and Turner are very clever and choose the most upbeat songs to go first; loosening everyone up through a shameless boogie on camera. Afterwards, the person is unmuted and welcome to elaborate on their choice, to tell the story of their song.

The event had been marked to ‘everyone [notably:] queer, poly, ace, non-monogomous, undefined + curious’, and thus the stories about each song choice are contextualised within the (often queer) life of the individual. The audience straddles multiple generations and LGBTQ+ communities.  Many reminisce about past times spent in IRL queer spaces, and “..and through some stories we are led on a tour of gay nightclubs in London and across Europe in the 80s; a particularly poignant experience for those who have lived those amazing moments, but also, surprisingly, for me, as I - like many young people - can vividly imagine, and are heartbroken to have not experienced it. This nostalgia for irl spaces, for times spent with friends, for connection, and for fun was expressed by all of the members of my club on the night of the 5th November. And as the fireworks burst throughout the sky outside each of our windows, I couldn’t help but feel completely connected to them all.

I could recount each and every member of my club’s stories back - but it would feel a breach in the privacy, let alone the sanctity of the evening, if I were to disclose any of it here. All I can say is that there were stories of heartbreak, of late friends, of the most glorious times. Much dancing was had, and many, many tears were shed.

I can say wholeheartedly that this digitalised event was the best I’ve attended, with the most original concept and content. The company responded to the challenges presented by lockdown, and attended to the needs of their potential audiences with heart, soul and compassion. She Goat, as always, have absolutely knocked my socks off, and inspired me to boot. I would have paid for this event had it not been free.